What Opportunities Can Expats Find in China after Covid-19? 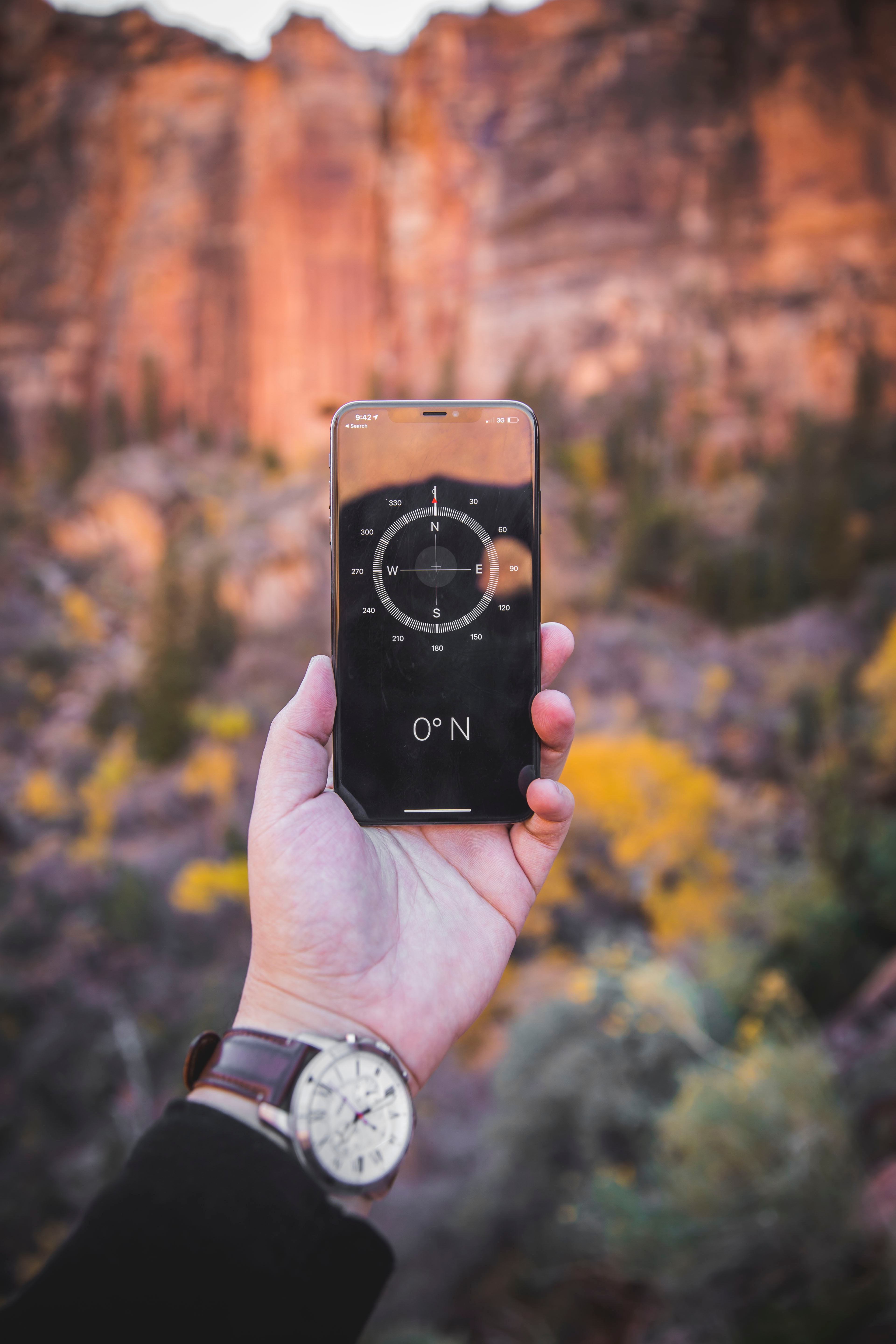 What Opportunities Can Expats Find in China after Covid-19?

Following the Covid-19 crisis, many expats and “nomads” had to put their international journey on hold, and maybe even rethink the career path they had envisioned. As a matter of fact, some international assignments have been reconsidered, while the job market for foreigners has been shaken due to the extra cost these employees might bring along compared to the local population.

As such, some foreigners used to or considering working abroad are now considering new career options aside from the traditional ones.

A recent report by Startup Genome ranked Beijing, Shanghai and Guangzhou as part of the top cities for those eager to become to entrepreneurs. Among cities such as New York, London, Boston, Seattle or Stockholm; Chinese cities seems to have gained a good reputation amid start-up-savvy people. In anticipation of the post-covid crisis, it is nowadays relevant to have a look at what are the opportunities awaiting those eager to start a project abroad, more specifically in China.

The Situation During the Crisis 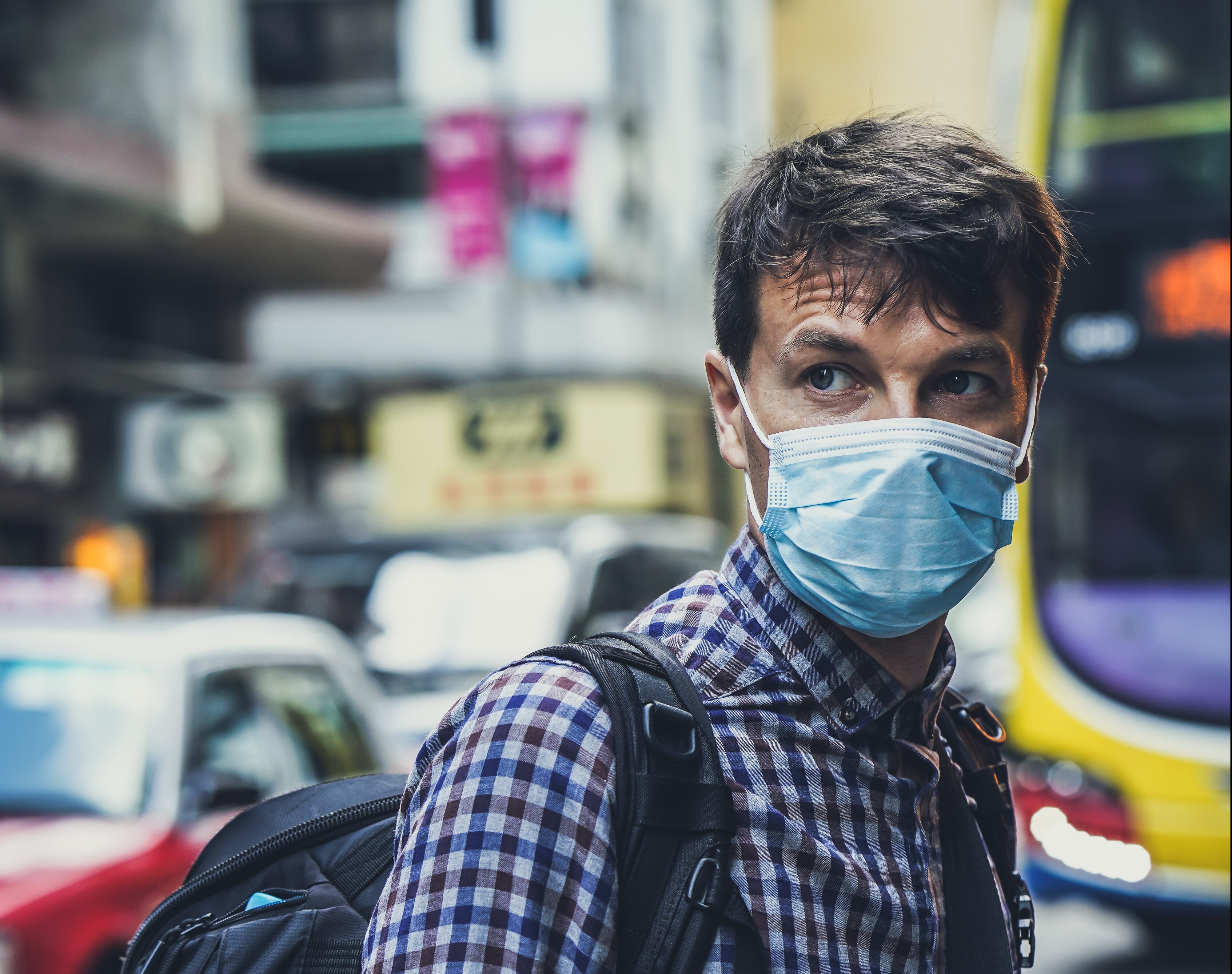 It doesn’t come as a surprise that the Covid-19 crisis has had a huge impact on entrepreneurship in China. As of January 2020, we could already see the pandemic's (at the time only epidemic) outputs: 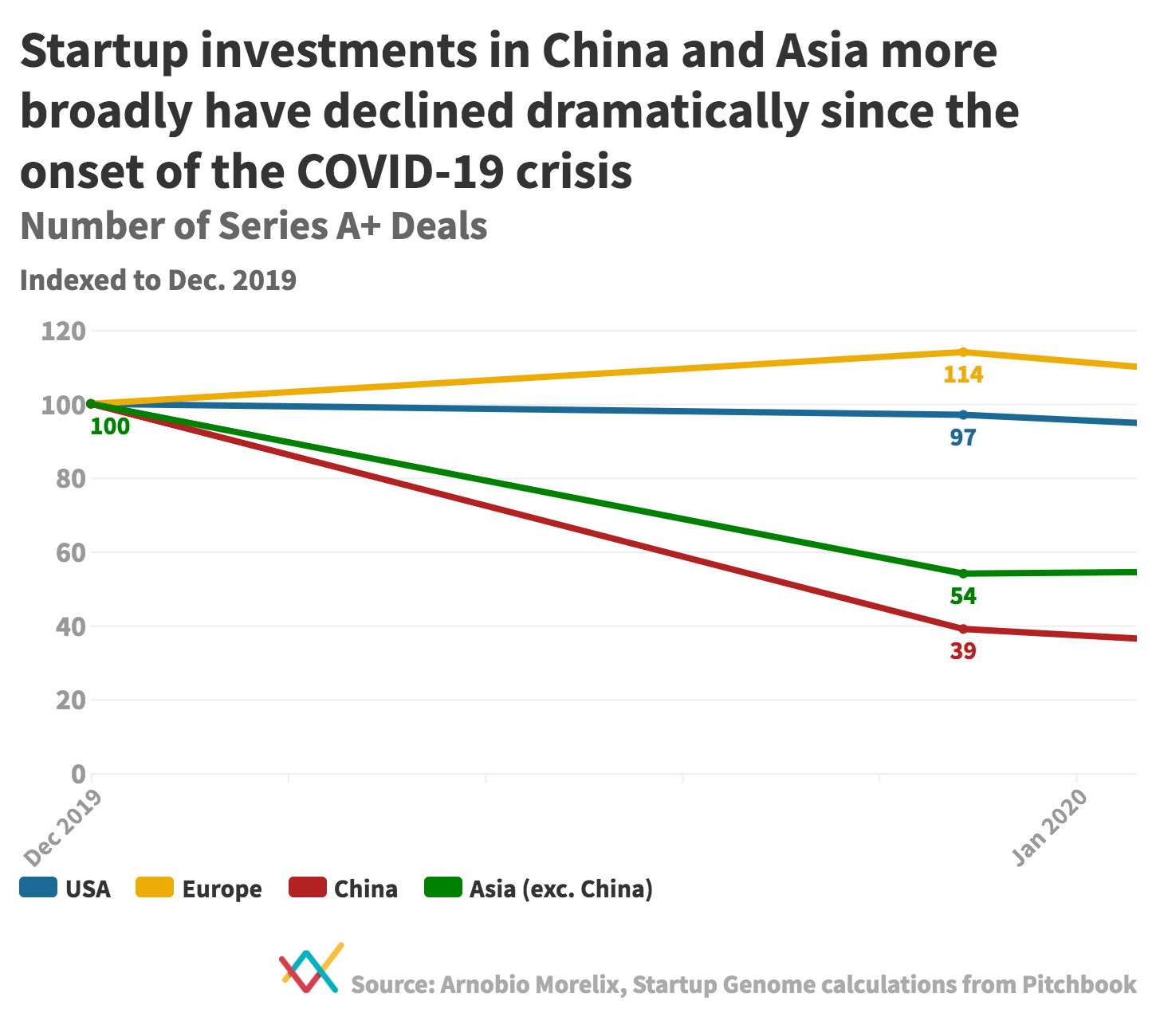 “When we break down the numbers by region, we see that China saw the biggest drop in funding, followed by the rest of Asia. This is not surprising considering the importance of Chinese capital throughout Asia’s startup ecosystems and the start of the virus in Taiwan and Korea in January” Startup Genome noted. It is worth noticing that this drop was not only due to the Chinese New Year – normally quieter – period. The 3 previous years actually show an equal or higher number of deals in January which highlights even more the effects of the pandemic.

An Economic Recovery to Benefit Entrepreneurs? 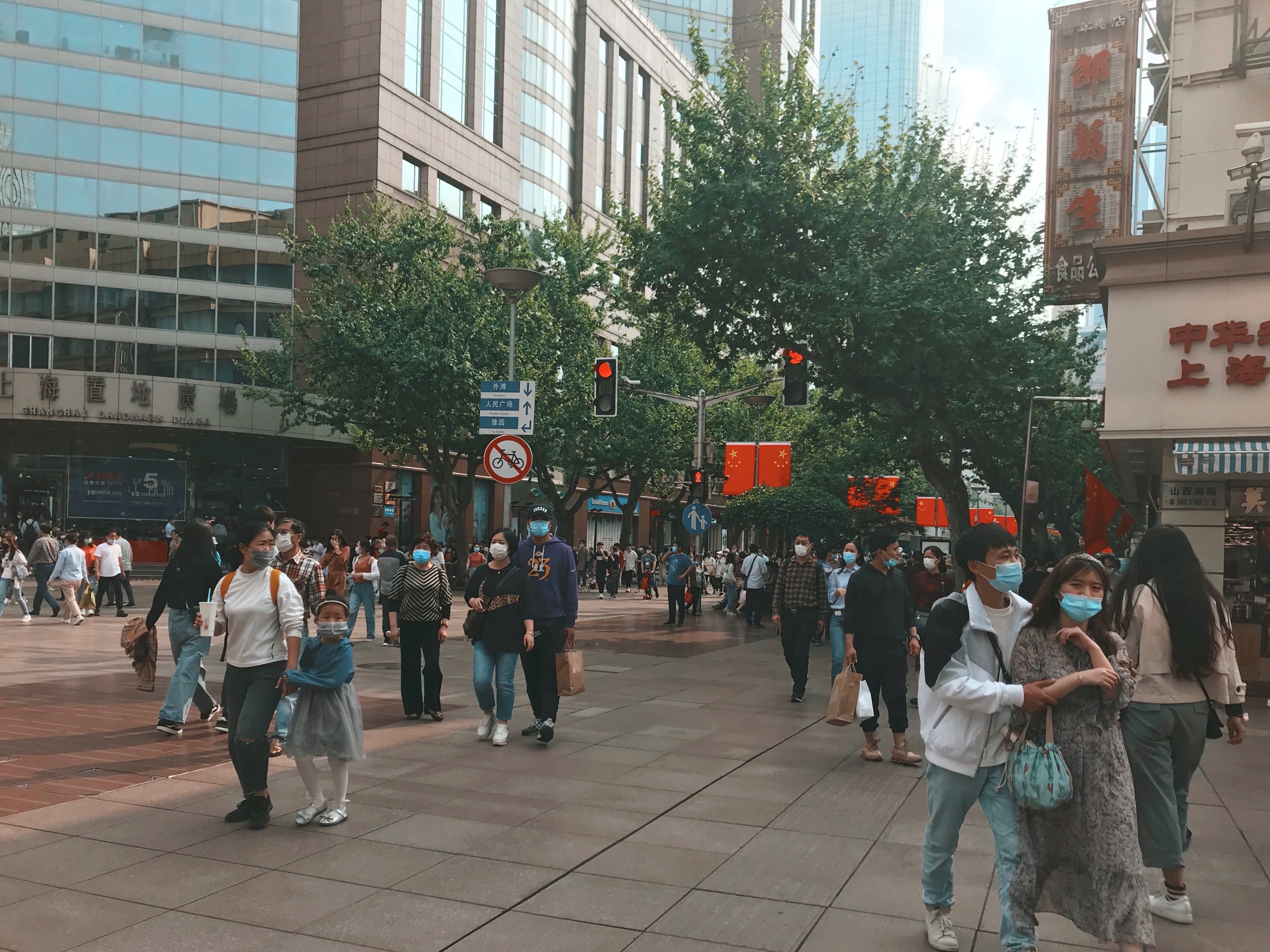 Because the pandemic first started and thus ended in China, this is no surprise that the economy will revive there first. The Global Times indeed underlines that after a 6.8% contraction of its GDP (year on year) in the first quarter 2020, the second quarter showed a 3.2% increase.

Even if China leading the economic recovery depends largely on whether or not other countries also restart and thus act as economic partners, Chinese imports and exports both increased in June, showing good signs for the future.

CGTN credits the Hi-Tech startups companies and entrepreneurs for this recovery, highlighting that they created and are creating new business formats which not only answered the Chinese population needs during the lockdown, but also changed the way they think and consume, paving the way for a post-covid business environment.

Experts thus talked of a structural change which favors entrepreneurship, especially the technology-based kind. This is particularly true in China where new technologies have been adopted at a greater rate, and whose use is more widespread.

In comparison to the early effects of the pandemic, startups seem to have done fairly well during the international crisis in China. Calvin Jiang (founder of a high-tech consulting firm in Beijing) stated in his interview to CGTN that “Hi-Tech startups and small businesses are robust despite the Covid-19 outbreak”. It is added that “after the 2008 great recession, top universities in the United States have launched various startup incubation to find a way out there to boost the labor market. According to U.S. Bureau of Economic Analysis, the average employment in 2011 at high-tech and information and communications technology firms surpasses those across the private sector as a whole. In turn, China is experiencing a similar kind of stage currently that a new cycle of job creation is yet to come”.

What Does It Mean For Expats? 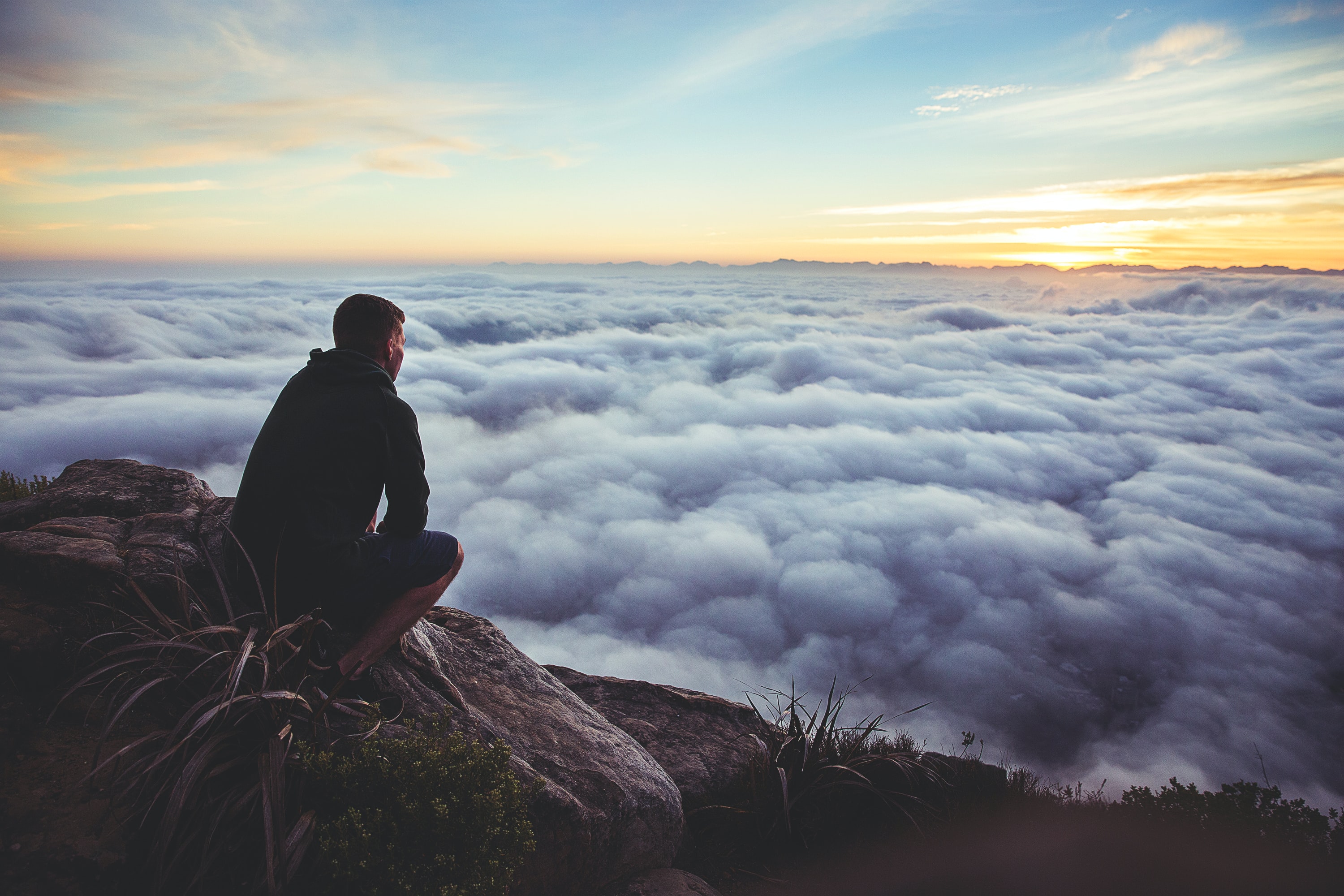 The Covid-19 crisis has been the occasion for many creative people to work on entrepreneurial projects they had in mind for some time. It has also been a great opportunity for others to acquire new skills through online resources and e-learning, those skills potentially serving their entrepreneurial visions.

Where can these projects develop then? The article from expat.com we previously mentioned, and which is titled “how to succeed as an overseas entrepreneur after the covid-19 crisis”, argued that major cities like New York, London, Boston, Seattle, Stockholm, but also Beijing and Shanghai were interesting options. Guangzhou has also been recognized as an emerging city for entrepreneurs to develop in.

Expats eager to become entrepreneurs might thus find great opportunities in China once the immigration regulations have resumed to their normal state. As we pointed out in a previous article, a Business Startup visa does exist in China. It enables those having it to live in China while launching their innovative business. It also allows them to conduct auxiliary businesses related to their business launch while developing their main activity. Note that this visa is available for foreign students, foreigners planning to invest in Shanghai or to innovate in business, as well as for excellent overseas graduates.

While older and large (and thus traditional) firms are the major source of employment in China, new and young businesses are the ones creating the most new jobs, underlines Donghui Mao in his interview to CGTN. Donghui Mao is the director of X-Lab in Tsinghua University, a non-profit university-based educational platform that aims at nurturing STEM students into social entrepreneurs through international incubation. This acknowledgment shows that new and innovative businesses are the most prone to answer modern customers’ demands, and thus the most effective at grasping opportunities.

The aftermath of the Covid-19 crisis might be a key turning point – either by choice or by necessity – in many creative minds' careers. The general trend as well as the positioning of China on this matter makes it likely that foreign entrepreneurs will find great opportunities in the country to develop their innovative project.

While many in the world are still greatly impacted by the crisis, the progressive reopening of borders enables those eager to do so to envision what their career could be like in a post-covid world.

The recent pandemic has greatly challenged global mobility, some of those living abroad have even found themselves unable to come back to their country of residence. Many have contacted us worried about retrieving the items that stayed behind.

We know how precious some of them can be, and have thus designed tailor-made solutions for those finding themselves in such a situation.